But finally, earlier this morning on 7.14.2015, New Horizons began her closest approach to Pluto. It will take on average more than 5 hours for her photos and other observations to arrive back on earth, where billions of fascinated people around the world will be treated to a series of ever-sharpening, higher resolution color photos of the little dwarf planet, which might be “the last in the solar system”, but never the least in our hearts. I personally mark this day as being every bit as important as the day we landed on the moon for the first time. It’s a fantastic science / astronomy milestone for all of humanity to celebrate and treasure forever.

If you are like me, and cannot get enough of all of it – be sure to tune into the National Geographic Channel tonight at 9 pm EST for a one hour documentary about the mission to Pluto. Get more info here.

Cited:  At 7:49 a.m. EDT, NASA’s New Horizons spacecraft flew within 8,000 miles of dwarf planet Pluto after a 9.5-year journey through the solar system. Though the spacecraft was quiet during the flyby—it won’t phone home again until later tonight—the scene inside mission control at the Johns Hopkins Applied Physical Laboratory was anything but silent, with hundreds of people erupting in cheers and waving flags at the moment of closest approach.

Live coverage of NASA’s New Horizons mission is here. You can login to YouTube to participate in live chat about the ongoing mission. This page will be updated all week:

Dwarf planet Pluto finally revealed in super sharp detail and rich color. This tiny world, if placed over the USA, would reach from the west coast to about the furthest eastern edge of Oklahoma id diameter, about 1,471 miles across. It is a ruddy rusty beige cream color, with rugged geological features, fascinating craters and an ancient pock-marked surface, with several apparent mountain ranges, ridges, rifts and deep chasms and gulleys. Pluto also shows signs of having vast plains of ice and snow, which were expected. There is now a flurry of activity afoot to find proper names for Pluto’s thousands of diverse surface features.

There has been no shortage of earlier, ‘blurry blob’ photos taken of Pluto as New Horizons swung into the last few hundred million miles of her last approach. There has also been no shortage of delightfully complex info-graphics explaining a thousand details about this historic mission. I have selected just a few of the more noteworthy ones and included them in this post.

Below, an artist’s rendering of what is hoped for in new clarity and sharpness of our photographic images of Pluto, as the fly-by information is beamed back to earth: 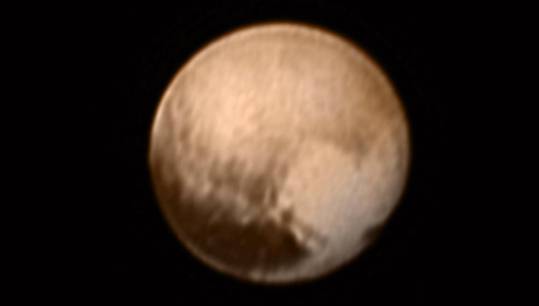 An earlier photograph of Pluto, although blurry, represented the very best image we had of the geologically rich and icy little world, which orbits the sun every 6 years at a distance of 3.2 billion miles away from earth, at the very edge of our solar system. Astronomers have already discovered Pluto is larger than previously thought, and may have snowy regions. We will all know more by this evening. [ July 14th 2015]

Follow world military news and how US tax dollars are spent

Hot topics and Internet memes in the entertainment world.

My site brings all of the evidence and signs together showing there is a pole shift coming in the near future.

Latest trends in science and technology.

AstroNews is an astronomy and spaceflight-related website providing the latest news and information from around the world.

"account must be taken of psychological reactions—even in the influential research community—to the variations towards greater or less warmth as and when they occur." Hubert Lamb

The Astrophysics journal
Weston Gave Me A Camera

Life, the Universe, and Everything....